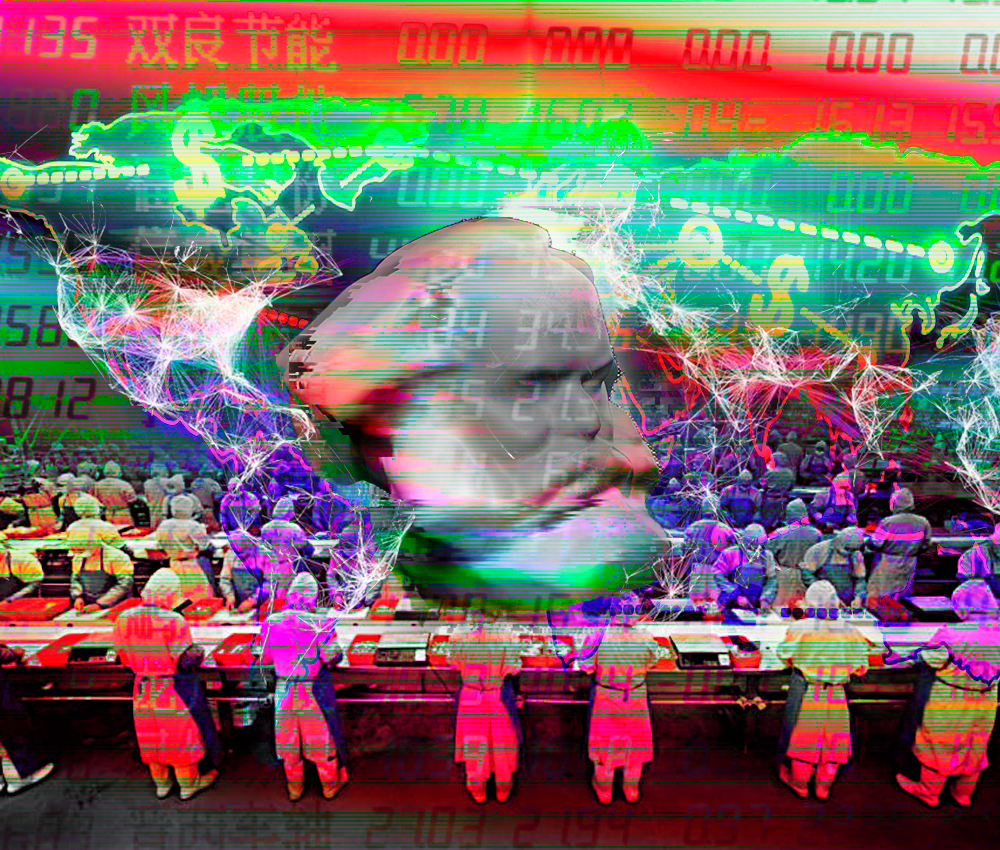 The previous installment dealt with describing the function of money as a means of circulation and the behavior, as well as the factors, that intervene in its circulation.

It was shown that the metamorphoses of commodities consists of two phases (sell and purchase) where commodities (C) and money (M) move asymmetrically in opposite directions each time they change hands. Such relation, represented in the C-M-C equation, is meant to reflect the way commodities get inextricably entwined with other commodities in their circulation. Thus, mercantile exchange has a dual effect in developing the metabolic process of human labor and in connecting persons under constantly changing roles.

So far, the transactions considered have been those that take place immediately: a sell, a purchase. Nevertheless, the time-spans of these relations can be stretched out. And in doing so, new relations emerge.

Hoarding is the phenomenon of the immobilization of money circulation. The commodity seller/buyer becomes a hoarder when the possibility that the product of a sale, the “golden chrysalis” (or money) is kept latent; revealing a complementary movement to C-M-C, namely, M-C-M which, in turn, reveals a different purpose.

Since everything is commensurable in money. Everything, commodity or not, is convertible into money. This potentiality prompts a desire for hoarding unlimited in its nature [1]. Marx notes that this hoarding is motivated by a fetish of gold that attaches itself to a “gospel of abstinence” [2] which prevents money from circulating and thus dissolving in purchases or means of enjoyment.

As a medium of circulation, money is a “radical leveler”, it brings with it a sense of democracy–a bill in your pocket gives you the same purchasing power as a bill in mine. Nevertheless, money is also “itself a commodity, an external object capable of becoming the private property of any individual. Thus, the social power becomes the private power of private persons” —the private appropriation of money gives way to the possibility of private concentration of power.

It is important to mention that this possibility is rendered out of a contradiction: “money is independent of all limits, it is representative of material wealth as convertible into any other commodity. But money, at the same time, is limited in amount, having limited efficacy as a means of purchase. This contradiction between quantitative limitation and qualitative lack of limitation of money keeps driving the hoarder back to his Sisyphean task: accumulation” [3].

The equation of hoarding (M-C-M) reveals its full potential when it is used not to describe the immediate realization of a transaction, but when it describes the commodity circulation process in protracted time scales. From it novel social relationships emerge: the credit system, where the seller becomes a lender and the buyer becomes a debtor.

In the credit system, commodities and money cease to appear simultaneously at the two poles of the purchasing process. Money works now, first as a measure of value in determining the price of commodities sold and second, it functions as a nominal means of purchase, i.e. money functions only in name. Although it exists only as the buyer’s promise to pay, it nevertheless causes the commodities to change hands. No longer immediately mediating the process, the money paid to the creditor, at the end of the transaction, must be greater than the initial loan (i.e., it must earn interest).

This is the first moment where we see the circulation of capital crystallizing from the circulation of commodities brought about by the contradictions of the monetary form. It is the moment of hatching of capital from the form of capitalist circulation, where money is used to obtain more money. Derived from an analysis of the logical and abstract content of the economic and social categories of the movement of commodities, this is the starting point for the capitalist process of circulation. It can be said that the contradictions in the monetary form create the possibility for the emergence of the capitalist mode of circulation.

It is important to remember that Marx reaches this stage of development based on the internal contradictions of money (use value and exchange value) and their various modes of circulation. This opposition is externalized in the monetary form which aims to represent value and promotes the exchange of commodities, while this same opposition is also internalized in the monetary form as a means of circulation and a measure of value. These contradictions obtain enough room to move, they gain momentum and develop into the credit system.

The credit system thus promotes a possibility immanent in the function of money as the individual embodiment of social work, i.e., as exchange-value and as a universal commodity. As credit, the universal commodity (money) can be independent, separated from the daily circulation of commodities. This is a contradiction that can manifest itself as a monetary crisis: it occurs where the consecutive chain of payments and an artificial compensation system have reached their full development and money passes from the purely ideal figure of account money to that of hard cash. The use value of commodities is lost and its value vanishes in face of its own form of value [4].

This leads to add two nuances to the theory of the amount of money that was touched upon in the previous installment. In a situation where commodities circulate without their monetary equivalent appearing until a future date, credit money arises and works as money in debt certificates (circulating and transferring credit to others). As such, money takes peculiar forms of existence, inhabiting the sphere of large-scale commercial transactions. With a certain degree and level of commodity production, money becomes the universal material of contracts. The rents, taxes stop being contributions in kind to become monetary payments [5].

Given these considerations, the need arises to accumulate money as a means of payment. But accumulation and hoarding are not simply synonyms, they have different functions: the former grows as a reserve fund for the means of payment as bourgeois society advances. Simultaneously, hoarding as an independent form of personal enrichment recedes.

As its name suggests, world money is the field where all states, within their geopolitical borders, end up connecting. National monetary policies are subject to the discipline that world commodity exchange imposes. “World money serves as universal wealth; as a means of payment in the settling of international balances. Gold and silver serve essentially as international means of purchase when the customary equilibrium in the interchange of products between different nations is suddenly disturbed”.

Lastly, it serves as “the universally recognized social materialization of wealth, whenever it is a matter of transferring wealth from one country to another” [6]. This refers to scenarios where the transfer in the form of commodities is ruled out, either by the conjuncture of the market, or by the purpose of the transfer itself ”.

Gold and silver are necessary for countries to circulate in the world market, they are the genuine money-commodity. The flows of gold and silver have a double character. On the one hand, it is poured throughout the world market, being absorbed into the national spheres and supplying the material for luxury objects, petrifying itself in the form of accumulated opulence. This first movement is between some countries, transmitted through the direct exchange of commodities, with other countries for the labor of extraction in their metalliferous provinces. On the other hand, gold and silver constantly flow backwards and forwards between the various national spheres of circulation following the unceasing fluctuations in exchange rates [7].

We’ve dealt so far with the relations arising out of the hoarding of money which expand into a new component within the conventional C-M-C commodity exchange relation. There is a big difference between the circulation of money as a mediator of commodity exchange and money used as capital. A society can be monetized and not necessarily be capitalist. In such a way, the C-M-C process describes money merely as a mediator.

On the other hand, the M-C-M relation, which summarizes the credit relation, is a form of circulation whose goal is to increase the money supply. Its feasibility depends on it increasing, through interest, the input of money at the end of the movement. Thus, such relation constitutes the inception of capital —which emerges when money is put into circulation in order to get more money.

The velocity of circulation of money is also a topic upon which there has been some development in face of the credit relations. The new iteration asserts that the quantity of the money required for meeting the periodic payments of credit relations is in direct proportion to the length of the periods. In shot, the longer the period, the more money is needed, and vice versa.

While the state may play a critical role in the stabilization of a national monetary system, in the larger, global scale of world money, it is posited to be ruled by gold which is connected to the world market and subject to its dynamics. Although, since 1973 gold no longer represents value, it is justified to argue the invalidity of this statement. But it should be kept in mind that gold is depicted simply as a representation of value or socially necessary labor-time. What has happened is that the manner of representation has changed: the value of a particular currency in face of all other currencies is determined now in terms of the value of the total stock of commodities —the overall productivity of a national economy would stand in as a substitute for the money-commodity of precious metals.

The main topics of chapter 3 of Capital vol. 1 have so far been covered in their entirety. A final overview of the topics covered in this and the previous posts will follow shortly.

[1] “With the possibility of keeping hold of the commodity as exchange-value, or exchange­ value as a commodity, the lust for gold awakens” (Marx, 1867: 229).