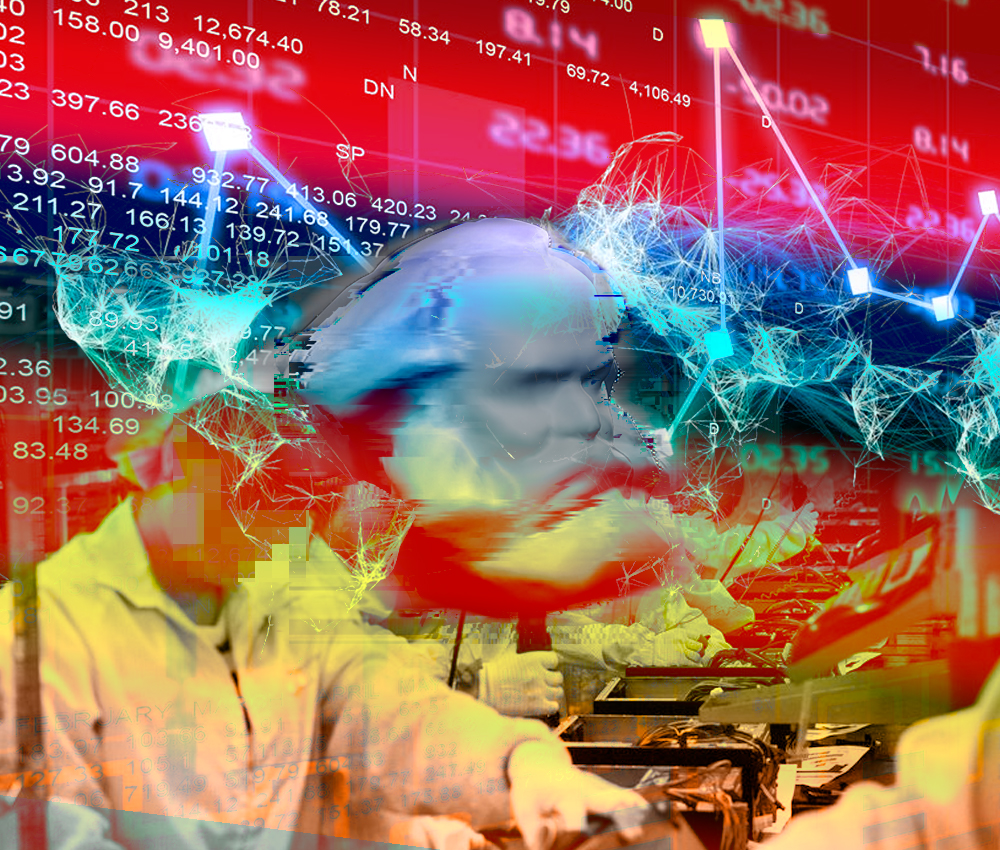 In the last installment of this series the function of money as a measure of value was addressed. It was shown that money is equipped with a binary function which allows money to express the work a commodity embodies and the capability of money to be transformed into other commodities.

The quantitative and qualitative contradictions of money were also explained. The former points to the tendency of prices to converge in an average of necessary labor time: equilibrium price. The latter refers to instances where the price ceases altogether to express value; it is just price without value. The price-form therefore implies both the exchangeability of commodities for money and the necessity of exchanges.

At the get go, this section opens with a description of the circulation of commodities as “a process of social metabolism” [1] in which an exchanged commodity splits into both commodity and money. These two elements are presented inversely, each one as a pole, and at the same time reflect the reciprocal relationship that mediates them. We see therefore that commodities (C) and money (M) move in opposite directions each time they change hands.

Marx proposes an equation that describes the aforementioned chain of movements. Value changes shape in the C-M-C relationship [2]: a binary metamorphosis where commodity (C) passes into money (M) and money (M) passes into commodity (C). It might appear that both movements are symmetric or equivalent transactions but before making such assumptions we shall first analyze the dynamic of both parts.

First, the sale, described in the C-M transaction. It implies the change of form of a particular commodity into the money commodity. In other words, a movement from the particular to the universal. A sale depends on a series of social circumstances that define the wishes of consumers and their satisfaction by way of the production process.

Specifically, a diversity of commodities ready for exchange is unthinkable without the social and economic process of the division of labor [3]. Although this fact by itself does not ensure the sale of a commodity, such a transaction in any case implies always a change of form.

The commodity loses its original form the moment its use value is transformed into money, or what is the same, when a buyer transforms his money into a commodity. In other words, it is a simultaneous twofold process: sale (C-M) and purchase (M-C). Therefore, a first metamorphosis of commodities (C-M) is at the same time, a second metamorphosis of another opposed commodity (M-C)–its inverse transformation into merchandise from the money-form [4].

The alleged symmetry between buyer and seller that was previously mentioned might look like a solid prospect to hold on to. Nevertheless a full prying of the component pairs is yet to be complete.

The purchase (M-C) is the second and last metamorphosis of the commodity. It is presented not only as a reverse form of the sale (C-M) since a purchase is a movement from the universal to the particular, which is easier to achieve given the universal equivalence of the money commodity. “Money is the absolutely alienable commodity, because it is all other commodities divested of their shape, the product of their universal alienation”. Money as price mirrors in a basic form the production capacity through which the commodity came into being, defining the commodity’s limit of convertibility.

The binary components are opposite movements that complement each other, constituting a circuit dynamic moved by the contradictory determinations that the commodity is subjected to. The commodity is for its owner a non-value at the same time that it becomes a use-value for its buyer [5]. Furthermore, in the course of these metamorphoses commodities get “inextricably en­twined with the circuits of other commodities. This whole process constitutes the circulation of commodities” [6]. This mercantile exchange develops the metabolic process of human labor on the one hand and, on the other hand, develops natural linkages not subject to the control of the actors in these transactions.

The first factor explains that prices determine the amount of money (or means of circulation) present in a certain period of time. In order to allow the numerous metamorphoses of commodities that can potentially take place in a given place, the amount of money “required is determined beforehand by the sum of the prices of all these commodities.” Of course, prices can vary also with the value of the material of money (gold). Thus the change in the quantity of money is also in virtue of its measure of value. “First the price of the commodities varies in­versely as the value of the money, and then the quantity of the medium of circulation varies directly as the price of the commodities” [7].

Finally, the velocity of money circulation in a certain place (i.e., a country, region or town) and in a given period, encompasses the transactions that are carried out: the number of times that circulating monies turn around. “In the velocity of circulation, therefore, there appears the fluid unity of the antithetical and complementary phases, i.e. the transformation of the commodities from the form of utility into the form of value and their re-transformation in the reverse direction, or the two processes of sale and purchase” [9].

The law of the quantity of money therefore asserts that it is determined on the one hand by the sum of the prices of commodities in circulation, and on the other hand by the average speed of the sells and purchases (or metamorphoses). These factors are also what provide its own value to the money in circulation [10].

A highlight of the topics covered in this installment includes:

The two sections covered in this installment comprehend now two thirds of Marx’s elaborations on money in Capital Vol. 1. At this stage of the presentation of the circulation of commodities and money, the transactions considered have all been on an immediate basis. A deeper analysis shall reveal new social relations emerging from other modes of payment that take place at extended time-spans: credit relations.

[5] “Being a seller and being a buyer are therefore not fixed roles, but constantly attach themselves to different persons in the course of the circulation of commodities” (Ibid.: 206).

One thought on “Marx’s Theory of Money in Capital Vol. 1 (II)”